A Short Reflection on the Wu-Tang Clan

and the Music Video "Gravel Pit"

People all over the world have different taste in music, in film, in books, more or less in any type and form of art and entertainment. When I was asked to choose a music video and have a closer look at it, I immediately came up with “Gravel Pit” by the Wu-Tang Clan. In my mind it has all the characteristics of an unusual and special music clip. I would even recommend it to people who are bored or just want to spend six fun and entertaining minutes. In the following I will take a closer, rather unusual look, at the video and the background of the Wu-Tang Clan. It will be an analysis of my piece of mind.

I choose the video to Gravel Pit because it was the first one to pop up in my mind when I heard the task to this course. I remember watching it when I was like 12 or 13 years old. It was stuck in my mind ever since. The video is mixed with so many strange images, which usually don’t fit together, that it makes a very fun and interesting combination. It combines things that every growing boy likes.
It starts off with the Clan standing in an escalator that actually functions as a time machine. All of the sudden the viewer is confronted with this Fred Flintstone image.
The Wu-Tang Clan starts performing their song in this Gravel Pit setting with sexy ladies dressed with only very little pieces of fur. In the background you can see dinosaurs walking around. The Clan itself also is dressed with fur from head to toes, but in a more Hip Hop style of fashion. They act in a very barbarian-manner and even hit a woman over the head with a wooden club to claim what is theirs.
Concerning the lyrics the video is not very important and any other setting would have made the same effect on the viewers. Still it is very entertaining and shows how the Wu-Tang uses any image they fell like and are comfortable with. They make it their own. After the Clan stop performing their song and one thinks the video is over it continues and becomes even stranger, in a good, Wu-Tang style. It still takes place in the same setting, with women and dinosaurs, surrounded by an arena built out of stone, bones and fangs, but all of a sudden a pack of black Ninjas arrive and start attacking the Wu-Tang Clan. Now a wild and heavy fight between the Ninjas of the Wu-Tang Clan and the rival Ninjas escalates. And this is where the Clans fighter 4

mentality, which will be described later on, starts to play a role. Even though this scene is only there to entertain the viewers, and probably themselves, it is a perfected scene from any old martial arts movie, where the good fight the bad and stand up for their mind and freedom.

The Wu-Tang say about themselves: “it’s weird but it’s good”.
They aren’t just a common rap group where everybody just shares the name to reach fame and wealth. No, they are like a family. They call each other brothers and they see RZA as their family leader. He’s the mastermind behind all the music. He creates that unique sound that the Clan is so proud about. The members all write their own lyrics, but RZA turns it into the final piece of art. Besides RZA there are eight other original members of the Wu-Tang Clan: GZA, Ol' Dirty Bastard, Method Man, Raekwon, Ghostface Killah, U-God, Inspectah Deck and Masta Killa. Together as a group they have proved to be revolutionary in the music business, the things they rap about, and also about how society sees them.
The “brothers”, as they call themselves, are based in the Staten Island of New York City where they started forming themselves to become the later Wu-Tang Clan in the late 80’s. Staten Island and their style of living have marked them for live. They say about themselves that even if they would move away, the streets will always play a huge role in their lives, for they have learned a lot from the life on the streets and the slums they were raised in. They knew from the beginning that they would be successful. They were confident, for they had RZA to recreate their style. Even if it took long to build, they grew into being the Wu-Tang Clan. Wu-Tang is one big thing. Being from the same projects they became brothers connected through music.
The Wu-Tang Clan is ever changing. They were a head of their time. They have a vivid imagination and make sure to create their own view of things.
As teenage boys they lived from day to day. They didn’t see any future for themselves and so they did anything that was necessary to survive the harsh life on the streets. They used to sell drugs and hustle on the streets of Staten Island. Yet, all along they were into music and were rapping about their everyday life. And exactly this is what is, up to today, what is most important to them when making music. They 5

only rap about real things, about things that have happened to them in their own, actual, real life. Method Man says that even after all the success and the fortune and fame, being real is all that counts for them. They don’t want to change their mental attitude for any reason. They don’t expect everybody to like what they are doing, but at the same time they don’t care if society doesn’t like it.
The Clan wants people to understand the lyrics and where they are coming from. They want their audience and critics to get a clearer picture. GZA says: “It’s like reading a book versus watching a movie. If you read a book you can get a closer and deeper meaning of the message”. They don’t expect everybody to like what they are doing, but the people that do listen and have been to the same struggle see them as street narrators. They want every message to be positive and supposed to be taken as such. They try to teach. They speak for the people that can’t be heard and try to spread knowledge. And that’s all it’s about!
Next to being and keeping it “real” the Clan is concerned about the message and meaning in their songs. While the fans like exactly that about the Clan and are crazy for every new song the Wu-Tang bring out, the authorities and people that think that rap is a bad influence on the youth are of the opposite opinion. With the song CREAM, which made their success perfect, society started becoming skeptical. The Wu-Tang Clan wanted to teach the truth to the young, black youth, living the same lifestyle as them. Truth is one theme that the whole Clan cares about in a great way. Method Man says about the Clan that they don’t want to keep the people blind. “Hip Hop is the greatest form of expression. It is art.” It is supposed to show how life really is and make society understand them without judging them and their lifestyle. “What is real? You can’t hide pain. Pain is real.”
So in general the Clan is about entertaining and being real. They want to express themselves and let the world be part in their lives. In an interview they said: “The response that they get from the crowd is what makes them keep going. It is the greatest thing they get through performing.”
Even though they are “real” they tried to escape reality through the magic of movies. Especially martial arts movies are what influenced them in a major way. Even their group name comes from a martial arts movie that they used to watch over and over again. They are impressed by the martial arts and they say it is part of who 6

they are. They even went as far as calling Staten Island Shaolin. They relate to martial arts even more than only taking names from movies, but they adapt to the mentality of the warriors and the fighters. The way they are shown with brutal force going against their enemies. They applied the morals of the stories to their everyday life basis: BROTHERHOOD; HONOR, RESPECT, DISCIPLINE, TRUST.
The Shaolin style of fighting is the basis for many other styles of fighting. GZA says that: “Shaolin is the birth place of all the styles. And we are masters”.
They wanted to create a new thing. The Wu-Tang is all about representing themselves and their family and friends. They don’t want to be compared to the commercialized music. They want to be unique. They don’t have only one style, but they combine different styles, which is what makes them the Wu-Tang Clan. They wanted to give people “a lot of food for thought”. They knew that many people couldn’t understand the deeper meanings of their songs and lyrics and so they liked to keep things simple. They gave people a chance to identify with them by giving their fans clear images in their music. They say about themselves. “Wu-Tang is a mentally strong style. It is a sword style of rhyming.” They are lyrical assassin. They use their tongues like a sword. “It can produce words that can be powerful and painful to others.”
The Wu-Tang Clan likes to think that they are better than others. They aren’t only good rappers but also act as role models for teenagers. They weren’t only trouble makers in their times on the street. They would always stand for what they say and do. And this again, made the Clan reachable for others and gives the kids a chance to go after what they want and like. The Wu-Tang Clan started off with absolutely nothing. They had no record label standing behind them and doing promotion work for them. They had to fight for everything they wanted to achieve. They started by selling their first album Protect ya neck out of the trunk of their cars. Method Man said about their way to the top: “NY is the place to make it happen. If you can make it in NY you can make it anywhere”. They were very ambitious and they knew, with their business mind, that the “brothers” had enough potential to shine.
Next to all the symbols and mentality that combines the 9 brothers, the logo of the Wu-Tang Clan is present all the time and shown on every single album they are part in. 7

I’ll keep this part down to the very basic and so this won’t need much explanation. The Wu-Tang Clan are one big happy family and life from each other. It’s all about staying together and being successful as a family. They make “Real Hip Hop with real lyrics and fat tracks.”
Protect ya neck! CREAM! 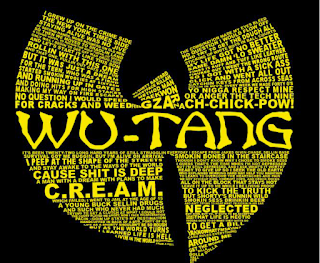